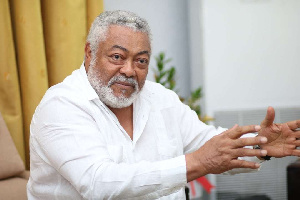 The Anlo Traditional Council (ATC) has announced its intention to organize a funeral ceremony for their beloved, late Jerry John Rawlings, The Chronicle reports.

According to the Avadada (Warlord) of the Anlo State, Togbe Agbesi Awusu II, the Council was not invited to partake in the ongoing funeral ceremony held in honour of the former statesman.

He furthered that there was no official communique written to the Council to seek their indulgence on Rawlings’ funeral but only read the state’s arrangements on social media.

This, the warlord said informed their decision to also not show up at the funeral grounds organized by the State.

The date for this funeral is yet to be made public by the Anlo Traditional Council, the Chronicle newspaper reported.

The late Jerry John Rawlings died at the Intensive Care Unit of the Korle-Bu Teaching hospital in November last year.

Before his demise, he was a chief in the Anlo State with the stool name Togbe Nutifafafia meaning a man of peace.

He was also a former statesman and the founder of the largest opposition party, the National Democratic Congress (NDC).

COVID-19 has so far killed 609 Ghanaians

Bawumia is a political colossus