Election of E.T Mensah to Council of State a good omen 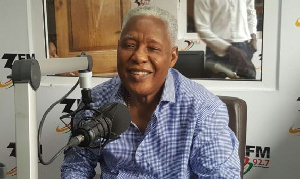 The Founder and Chief Executive Officer (CEO) of the Atta-Mills Institute, Koku Anyidoho, has described the victory of E.T Mensah in the Council of State elections in the Greater Accra Region, as a good omen for Ghana’s democracy.

He said the former and longest-serving sports minister is a stalwart in the PNDC and NDC and his sacrifices and contributions cannot be overlooked.

Speaking on Frontline on Rainbow Radio 87.5Fm, Mr. Anyidoho noted that this is not an NDC, NPP matter but a national agenda.

He told host Kwabena Agyapong that there is nothing more beautiful than to see an astute politician join the Council of State.

He said E.T Mensah would not stop being NDC, but today, he is a member of the Council of State of the Republic of Ghana.

“E.T Mensah is a member of the Council of State, the highest advisory body for the President of the Republic of Ghana. Bagbin is the Speaker of Parliament, the third most important person in the country. Today, Cletus Avoka is back in Parliament. The times and seasons are in the hands of God”.

Koku Anyidoho said these three personalities are astute politicians who have served their parties and nation well and their experience in their current positions would further deepen Ghana’s growth.