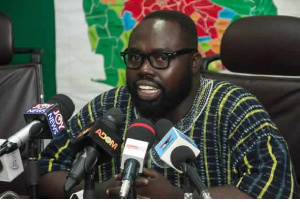 In the heat of the 2020 general elections, some political actors by their actions and mannerism brought humour to a rather charged political scene.

One of such persons was the Deputy General Secretary of the National Democratic Congress, Peter Boamah Otokunor whose regular chants during his party’s press conferences have become a feature of social media’s fun world.

At today’s sitting of the Supreme Court hearing of the 2020 Presidential Election petition, a video of the Deputy General Secretary in his elements was played in court.

Although the edited video did not contain his infamous “DJ bo yen nwom” (DJ play us a song) command, his statement at his party’s press conference where he and other members sought to declare their candidate winner of the presidential election was played in court.

The video was played at the request of the counsel for the second respondent who was seeking to establish that some NDC members had at various times declared their candidate winner of the elections.

Mr Otokunor in the video could be heard charging up his party’s supporters with the chant “tsoooboi” as he would always do.

The NDC’s General Secretary, Johnson Asiedu Nketia who is a witness for the petitioner was asked by the 2nd respondent’s counsel to authenticate the statements in the video.

Asked whether he and other members of his party had by implication of their statement sought to declare their candidate as the winner of the election, the NDC General Secretary in his response said his statement was not definite.

“I never said definitely that the petitioner has won the election,” he answered.

According to him, even though he cannot vouch for his subordinate, he was certain the statement was not definite and, in any case, his position as the General Secretary supersedes his deputy.

COVID-19 has so far killed 609 Ghanaians

Bawumia is a political colossus