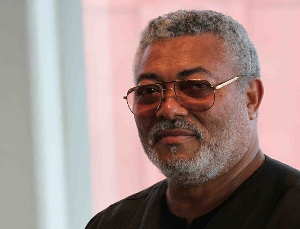 Dr Sekou Nkrumah, one of the sons of Osagyefo Dr Kwame Nkrumah, has in plain language chastised the late Jerry John Rawlings (Rtd.) over some of his dealings as a head of state and President of Ghana.

According to Sekou Nkrumah, Rawlings betrayed the idea of the June 4, 1979, coup after he staged the December 31, 1981, coup that overthrew the government of Dr Hilla Limman.

Sekou Nkrumah in a post on his Facebook timeline after the final burial of the military and civilian leader of Ghana noted that he was not able to speak in plain language just because he wanted to give ‘honour’ to Jerry John Rawlings’s memory.

However, once Rawlings has been buried, it is time to speak on some of the things he did as a leader.

“Let’s throw away the Ghanaian legendary hypocrisy and talk plain. The man was a very wicked man, and he was not a nice guy! Handsome yes, in his younger days. Charismatic? Sure, he was, and he could run his mouth like all the other empty barrels, including Trump!”

“He betrayed June 4 when he staged the Libyan sponsored 1981 coup, and he messed up on the revolutionary stage! After criticizing the IMF and World Bank he made a U-turn and embraced them, and in the process exposed his lack of socialist credentials,” parts of Dr Sekou Nkrumah’s post read.

He indicated that Rawlings was just a populist who climbed on the back of the ordinary Ghanaian to fame.

“JJ was also a violent, bloodthirsty man,” he said.

Sekou Nkrumah then followed with a series of questions that plastered allegations without offering any evidence.

“Don’t you think he and Kojo Tsikata were involved in the murder of the three judges? Why do you think Johnny Hansen resigned from the PNDC? Don’t you know that JJ was responsible for the killings and disappearances of many Ghanaians in the early days of his revolution?”

He then averred, Rawlings “hated the rich or privileged in society, yet he had no problems enjoying the good life established for himself as our longest-serving head of state!”

Sekou Nkrumah observed that the leader of the opposition National Democratic Congress (NDC) deserved the heckling from some people he [Rawlings] described as “babies with sharp teeth”.

He explained that Rawlings constantly attacked the late Professor John Evans Atta Mills just because he wanted to impose himself and his wishes on the late Professor who also later became the President of Ghana, but died in office.

“His hunger for power never diminished, he strongly believed that Ghana was justifiably his for the taking! He was smart enough to understand the Ghanaian way of thinking. We fear and respect authority, so the daredevil he was, he forcefully captured state power. And then terrorized the Ghanaian populace and pushed them into submission! Remember the culture of silence?

“Remember his mocking of Professor Adu Boahene during the 1992 elections campaign saying, ‘some of us will make history, and others will write it’?

“Yes, Rawlings never believed in democracy, it was rather the ‘democratization of violence’ he felt comfortable with, that was his element, his home!” Sekou Nkrumah’s post concluded.

Jerry John Rawlings died on November 12, 2020, at the Korle Bu Teaching Hospital after a short illness.

He was buried at the Military Cemetery in Accra on Wednesday, January 27, 2021.

He was survived by his wife, Nana Konadu Agyeman-Rawlings and four children.