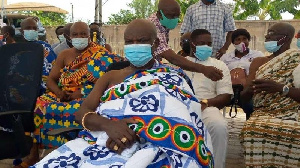 Katakyie Kwasi Bumankamah II, Paramount Chief for Sefwi-Wiawso traditional council has been elected as a council of state member for Western North.

He polled 18 out a total 18 votes at the premises of the Western North Regional Coordinating Council and supervised by the Electoral Commission.

Announcing the results, Mr Godwin Tawiah Ocley, Western North Regional Director of the Electoral Commission said, One of the aspirants Mr Christopher Addea withdrew before the commencement of the polls.

Ogyeahoho Yaw Gyebi II, Paramount Chief for Sefwi-Anwhiaso traditional area and President of the National House of Chiefs commended the Assembly members for the overwhelming endorsement.

He expressed worry over the fact that all the other three persons who contested the Paramount Chief were from the Anwhiaso traditional area a development he described as unfortunate.

He said considering the fact that the Waiwso Paramount Chief had six political Districts under him, it was in bad faith for anyone to contest him.

“I am ashamed of myself since all the three persons who contested Waiwso Paramount Chief are from my traditional area, I will have to summon and talk to them”. He pledged to work with the elected member to ensure Western North was fairly represented.

The Council of State Member-elect on his part commended Ogyeahoho Yaw Gyebi for his immense contribution in ensuring a free and fair elections and commended the Assembly Members for the confidence reposed in him.

He pledged to work with other members to give good Council to the President.

We Were Not Bribed To Approve Ministers – Haruna Iddrisu